skip to main | skip to sidebar

Please note my blog has now been transferred to Tumblr.

My Twitter
My portfolio
My illustration agent
My literary agent
Posted by Stephen Collins at 2:40 pm No comments:

New Portfolio And A Tumblr Page 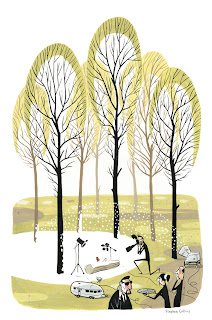 After ten years as an illustrator I’ve finally sorted my portfolio out. I've always had bits of old stuff on there which just looked out of date, or my style had moved on. But lately the look of my work seems to have settled down a bit, I'm not even sure why. I'm really happy with it all though - so much so I'm even considering going all Year Zero about it and deleting a large part of this blog... though that would be rather a shame as it's kind of a very public diary of my mid-twenties onwards, and all the illustration dead-ends therein. Anyway, if you want to have a look at the new stuff it's all at www.colillo.com

Oh, and I've got a Tumblr account, too. I might even move this whole blog over there soon as most of my writing efforts go into the comics these days, and Tumblr is much better for images and spreading them around the internets. Earth-shattering news, I know...

(The image above was an early draft of the Guardian Weekend Christmas cover illo, which was rejected but I liked it, so I painted it up in posh.)
Posted by Stephen Collins at 4:16 pm 1 comment:

The nearly-annual occurence of the Tom Humberstone-curated Solipsistic Pop is a-comin round the mountain once more. It's less an anthology more a group effort by people who toil at the craggy face of UK comics, and features contributions from about 20 artists each based loosely around a particular theme. This year's theme is Maps.

I'll be doing the cover and a page inside, which is rather daunting as the last three were really rather lovely looking things. Anyway, read all about it here... 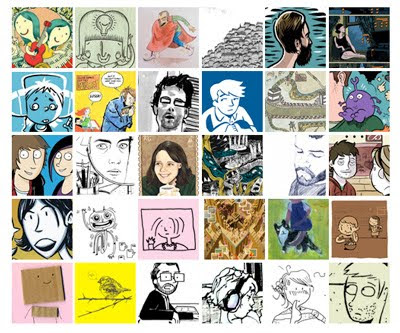 Posted by Stephen Collins at 2:06 pm No comments:

THIS BLOG STARTED AGES AGO BUT I CULLED THE MORE EMBARRASSING STUFF...

Stephen Collins
Cartoonist. Clients have included The Guardian, The Times, Wired, Prospect, BBC, GQ, FHM, Wall Street Journal, Deutsche Bank, and others. My first big comic, The Gigantic Beard That Was Evil, is published in May 2013 by Jonathan Cape.